I found out today that there is a high school reunion scheduled for September. I’ve been cordially invited to stay with a friend of mine from high school (and one of the only people I want to and can bear to talk to from high school). Thankfully, it was over facebook message so I could just click out of the page before responding instinctually. 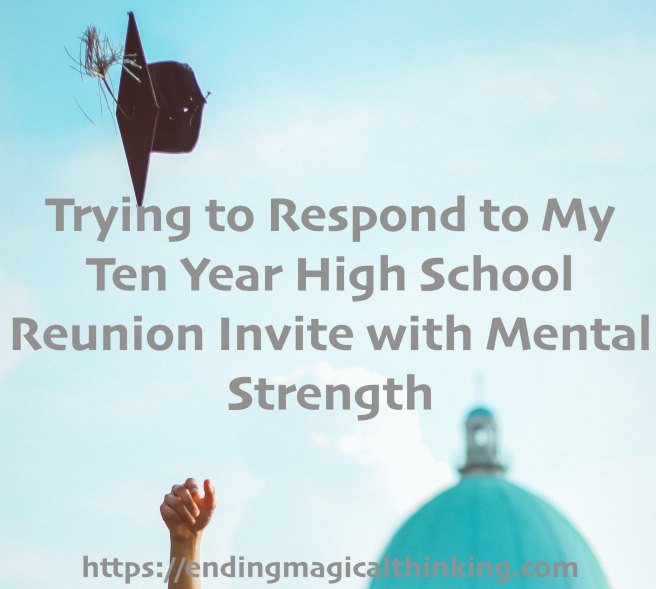 Which if I did would sound something like this: “Are you out of your ever lovin’ mind? Why on God’s green earth would I want to go to a high school reunion? Why for sweet pity’s sake would I want to see almost anyone from high school? Besides maybe you…? And that’s hard enough to do with having a panic attack.”

(And a side note: She mentioned that the party is at a brewery. We have a brewery now? I haven’t been back in almost ten years because my parents moved right after I graduated, but back then it was a dry county. And now we got breweries? Does this mean the town I went to high school in in North Texas is cool now? Perish the thought).

I’m trying not to get anxious just thinking about high school. I can’t imagine being able to go to that town without a hefty dose of Ativan. It was not a good time for me. It was a place I was happy to put in my rear-view window and then repress all memory of. I haven’t been back to the state, let alone the town.

High school might be a great time for some people, but for others it’s something we just put up with until we can hit the road. I worked my butt off to get to an out of state college with good financial aid so I could leave and stay left. And I have. I’m proud of that. I don’t even have much of an accent anymore. Instead I’ve tried to soak up where I live now and savor what is on offer here.

Like mental health care. I’d probably be still undiagnosed and untreated, just trying to cope, if I was back there. The rule seemed to be if you weren’t dying, you were doing just fine. And that’s no way to live.

Instead, in the last ten years I’ve had to deal with understanding and unraveling (when I can) all the coping mechanisms I created as a preteen and teen who did not fit in. My husband said, “Maybe ten years isn’t enough time. Maybe twenty years.” I mumbled, “Maybe fifty” snarkily.

If I could I would give every chronically ill kid, every weird kid, every nerdy kid, every kid who does not fit in the chance to see mental health practitioners and talk to them in private about their lives.

This post to the contrary, I don’t want to talk about or think about high school. It’s over. It’s done. So now I’ll go back to thinking about whether I want to make up some excuse about what I’m doing that weekend or just be honest about my lack of interest.

Photo by JodyHongFilms on Unsplash