One thing I feel in India, which might not jive with my descriptions of illness and monkeys, is a particular sense of safety which I have trouble getting at home in the US. 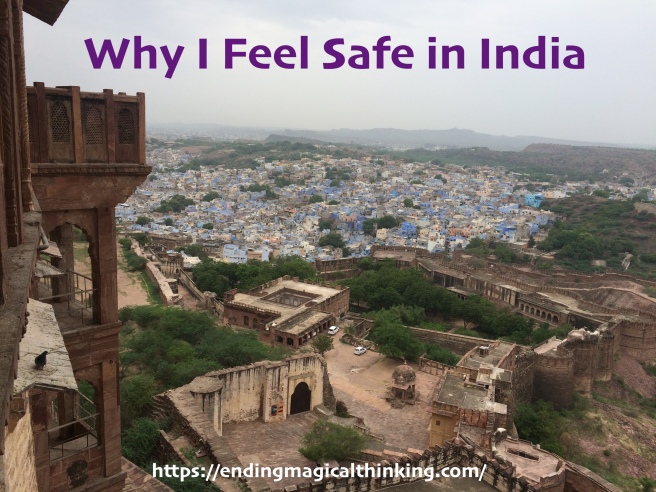 You see, in India, even with an address and GPS and heck, even someone giving you directions, it’s near impossible to find someone. Uber drivers and rickshawallahs with GPS on their apps often call to ask for directions to find you. To say addresses in India are non-intuitive, is an understatement. Think plot 24b and a half on a road that has multiple times and of which there are multiples all over the city.

It was even more impossible to find a place or person before GPS and Google. On my first trip to India I went with a fellow volunteer to the Taj Mahal. She used her guidebook and international calling plan to reserve a hotel room for the night we got there. We had the address and the guidebook, and we and our driver still had to stop every twenty feet or so to ask someone for directions. This took a while!

How does this relate to me and feeling safe?

In college, the summer after my freshman year I went to D.C. for an internship in Congress. I was incredibly excited and naïve. I was all set to learn about the political system and how to change the world.

While there, I met a boy who was also excited to be interning in the government and to work and live in D.C. He was from California and only a couple of years older than me. We went on a few dates and he went back to college at the end of the summer.

We promised to keep in touch, but my feelings weren’t that strong and when I got back to college in New Hampshire I quickly got back into the rhythms of campus…not to mention I got swine flu.

This boy became very upset when I did not return his calls and emails. He said he was worried. I thought that made sense, because I’d be out of it for a couple of weeks.

However, it became quickly clear that he expected me to write and call him constantly and to talk with him for hours. He thought we were exclusively dating and that I owed him all my time and attention.

I told him I wasn’t ready for anything that intense. He got very upset and started emailing me and calling me all hours of the day and night and demanding in voice mails and emails that I be his girlfriend. He started planning a trip to visit me at Christmas at my parents’ house. He was leaving messages about his plans.

He wrote delusional letters and emails about our epic romance and how we were meant to be together. I was his and he needed me. How could I throw our love away?

I told him he was upsetting me, and he wrote and called that he was sorry, but then quickly went back to barraging me with letters, calls, and emails.

I was scared, but I didn’t feel like I could do anything but ignore him completely based on my googling, which recommended absolutely no communication. Eventually, I got a new number, and just had to deal with emails and letters. I was nervous at my parents’ home but tried to ignore it and I was not there very much during breaks anyways.

I figured eventually he’d move on and realize that I wasn’t interested in him. I blocked him on facebook (and his friends when they tried to write me on his behalf). I didn’t create a linkedin for years until I felt pressured to do so to get a job post-graduation. I tried to make my internet presence as private as possible.

My parents moved and time continued to pass. I thought I was far enough in time and distance that it might be over.

Then he wrote to me at my new address—which freaked me out horribly. How did he get the address? Not my parents’, but mine?

The government sold me out– the act of getting a license and registering to vote put me on the government rolls and they gave my address away to anyone and everyone. It’s on the internet for anyone to look up. Turns out that kind of violation is completely legal.

I felt violated and vulnerable. I had panic attacks. Soon I went to India and I got a message via linkedin from him telling me he wanted to know what had gone wrong so long ago. It also freaked me out that he was still trying to get in touch with me, but I didn’t panic as badly then.

I told a friend of mine from the US studying Hindi with me about all of this, and she didn’t need to ask. She knew.

Because I was in India. I could barely find my apartment and I had spent multiple summers in this city. How would anyone else find me? If there’s a place to still get lost in this world, it would be India.

My name was on no lease, was not broadcast anywhere, and I didn’t even have an apartment number-my address was 2nd floor, door on the left.

I felt safe. I would like to feel that safe in the US. I wish we were a little less energetic with our records and everything couldn’t be found by a google search. I would like to control what is online and in public records that concerns me.

So I get nervous about sharing too much. However, I am also angry that that awful excuse for a human being got to scare me and control me like that. No one should have to feel so vulnerable, and I try not to think about how for many it is so much worse.

I still feel scared, but I wanted to start a blog, because it’s important to me to share and connect with others. I don’t want to hid away because of him, my anxiety, or anything else. I’m so tired of feeling scared. I don’t want to give others that kind of power over me. If my information is out there, then I want a say in the narrative.

I’m trying to balance a need to hide with a need to connect and be a part of the world.

But some days, I really miss how I feel in India.

(See the first three posts in this series on my travels in India by clicking Part I, Part II, or Part III).

2 thoughts on “Why I Feel Safe in India”